How CGI videos are bringing development plans to life for clients Thursday, 9th May 2019

Ingleton Wood is increasingly using detailed CGI software that offers an intricate look via video at plans so clients can see exactly how a development will take shape.

The latest one the firm has produced features Big Sky Development’s housing scheme at St Giles Park in Cringleford, south Norfolk, which recently received the thumbs up by planners.

Before the CGI technology, clients could only imagine how the plans would look on flat 2D images.

Now Ingleton Wood’s latest video takes you through the streets of a new development full of life complete with children playing, people jogging and even birds soaring over rooftops.

It moves the idea of CGI images on further, by using 3-D modelling of the actual planned houses so viewers can explore the future and what the community will look like when it is completed.

The Cringleford video took about two weeks to create. Chris Stammers, a director, masterplanner and architect at Ingleton Wood, said: “Creating a video from CGI software is a useful communication tool for helping people get a convincing flavour of the nature of buildings and spaces proposed, particularly useful on large schemes like St Giles Park.

“Videos are presented at planning committees as illustrative supporting material to help members and the public understand proposals in a way that is difficult to communicate with 2-D drawings.”

He said the software used was significantly more advanced because of the improvements in gaming technology, which much of it was based on, although there is an additional cost to the client.

Chris said all Ingleton Wood’s projects are now modelled in 3-D with the animation “easily developed” as a bolt on.

Spencer Burrell, from Big Sky Developments, based in Long Stratton, described the development of 67 homes, saying: “There will be a variety of apartments, bungalows and houses with a mix of homes from one to five bedrooms.” He said the opening of its sales centre would be in around Easter 2020.

The homes, off Newmarket Road in Cringleford, were given unanimous council approval. 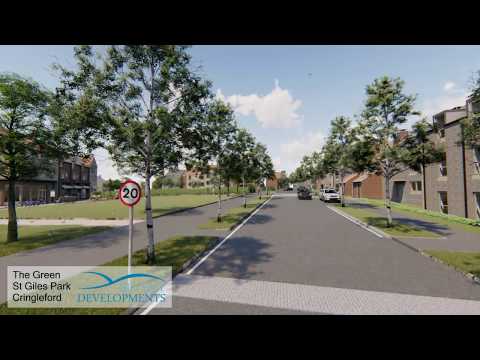