Kai Filbert and Asma Parker have joined our Colchester office on a four-year Level 6 Architectural Assistant Apprenticeship, equivalent to a degree and in partnership with London South Bank University, to become fully qualified Architect Assistants.

Asma, 18, from Colchester, said: “I’ve always been fascinated by the built environment but wasn’t sure about the pathways. I’m a hands-on person and although I applied for university, when it got closer to the time, I realised I wanted on-the-job training while earning a wage.”

During her research, Asma discovered the route taken by Lily Green who was supported by Ingleton Wood in becoming one of the first in the country to achieve a Level 7 Architectural Apprenticeship.

“I was inspired by Lily’s story and I feel like I’ve hit the jackpot with this opportunity!” Asma said. “It’s been brilliant so far. I’m learning so many skills and getting so much support from my mentor. Degree apprenticeships are getting more popular and I think more young people should definitely consider them. Some of my friends say ‘wow, I can’t believe what you’re doing!’.”

Kai, 19, from Basildon, chose the apprenticeship route because it offers the same benefits and qualification as university with the addition of invaluable on the job training.

He said: “I’ve always had a great appreciation for the built and natural environment so knew this was the path for me, and the opportunity to earn while you learn has been incredible.

“The support from Ingleton Wood has been amazing and we’re really benefiting from insight into real-life projects. Architects play a crucial role in designing sustainable buildings for the future and I’m very keen to harness the latest innovations to create the right change.”

He said: “I didn’t go to university because I didn’t feel that was right for me, but I was never encouraged to explore other paths such as degree apprenticeships and didn’t know what to do.”

After some work experience on a construction site via a friend, he realised hands-on building surveying work was for him. After leaving his job at Waitrose and completing a two-year college course in construction, he found Ingleton Wood’s apprenticeship opportunity online.

“I knew if I didn’t make a change by 30, I never would. It was a risk as we’d bought our first house but my hard work is paying off now. It’s the best thing I’ve ever done,” he added.

“I had heard of apprenticeships but thought they were for school leavers. I didn’t realise they were accessible for any age. Perceptions are changing and more older people are relaunching their careers. My advice is to always align your job to your skills, not the other way around.”

For anyone interested in apprenticeship opportunities at Ingleton Wood or to speak to someone about working in construction, email recruitment@ingletonwood.co.uk. 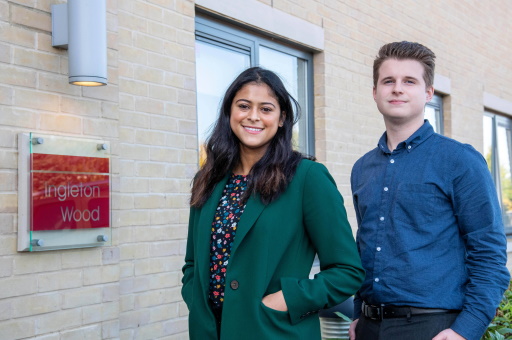